About a month ago, I gave the marketing team of WEINS Auto Group a job. Think of a dream car. Doesn’t matter how expensive it was, how rare it was or how absurd it was, tell me about your dream car. They delivered in spades, talking about everything from plausible (Buick Grand National) to completely out there (Lykan Hypersport). Sufficed to say, it was a fun article to write.

For a follow-up article, I decided just to remove any semblance of fun from the equation. I decided instead to ask the team to write about something on the exact opposite end of the spectrum: their very first car. This is the car that got them started, and for a couple of them, they were very humble beginnings. All cars had one thing in common: they were desired. There weren’t any instances of “I had to take this car”. They all had an idea of the car they wanted, and went for it. Some had their cars for a long time, one of them…not so much. But we all need to start somewhere. 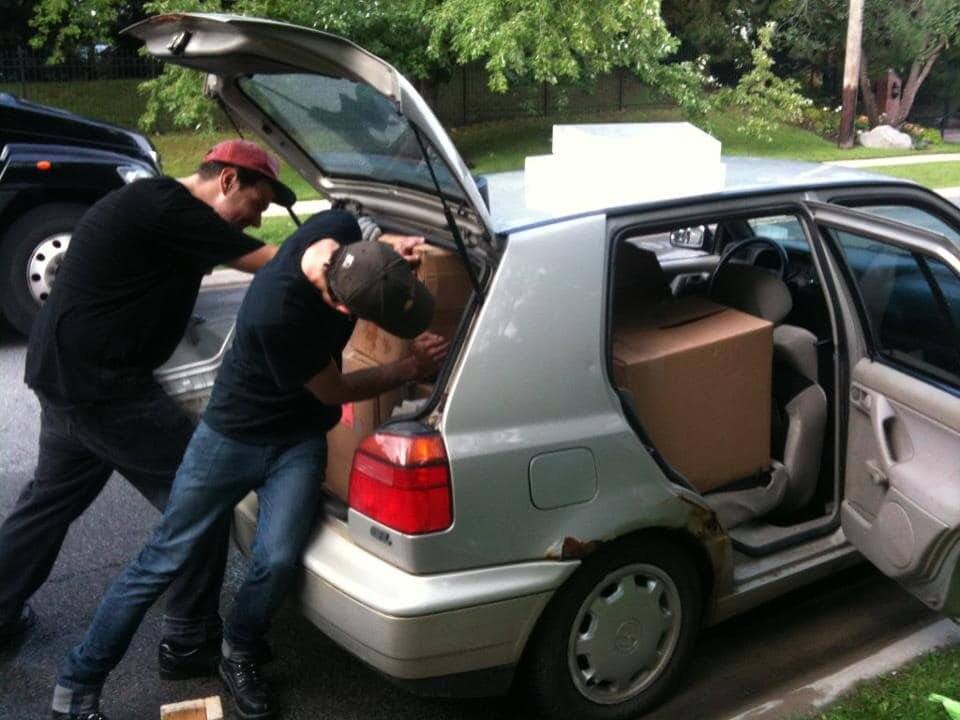 It was the summer of my second year of university, I was going to York, but after a year of living at Keele and Finch I figured out that I did not like living in residence or at Keel and Finch, so I found a big cheap, dirty house with a few friends at Bloor and Dufferin and moved in for my first summer as an “adult”. I had grown up in smaller towns, where if you didn’t have a car, you weren’t going anywhere ever. Although I was a 10-minute walk from the Dufferin subway station, I still missed the freedom of having a car.

I had about $3000, had never bought my own car before, so I began some trial and error. I started by going to the Local Franchise Dealerships in my hometown because that seemed less intimidating than Toronto Dealers. Walked into a few before I realized that it wasn’t going to work out. This was about 2005? So earlier internet days… But that’s where I needed to go, so I started checking Auto Trader and got it into my head that I wanted a Volkswagen Golf.

Pretty sure my want of a VW stems from this commercial that would have aired when I was about 12/13. Being on the cusp of my teenage years, I think this commercial spoke to my hopes and expectations about being a “teenager”, having more freedom, a more mature social life and I instantly fell in love with Nick Drake because of this commercial.

After scouring Trader, I went and checked out a half dozen mid 90’s Golfs that Used Car lots had listed online. Overall, all of those Garages were full of pretty nice guys who did not want to sell me their Golfs. Instead, they would try and sell me an equally priced Corolla or a Ford Escort. In retrospect, it’s pretty commendable that all those Sales Associates were looking out for a 20-year-old kid they had just met. Despite their best intentions, I was set on a Volkswagen. I’ve always had an inclination for “interesting” vs. reliable/practical so back to the internet I went.

After a few more weeks, I stumbled upon a 1996 Golf on craigslist for $3500, the girl who was selling it was just a few blocks west, so I made the appointment and she picked me up for a test drive. I had never really driven in Toronto before, so I was white-knuckled as I drove 20km/h along Dupont. The girl selling the car advised that I should take it to the Allen (which I had no context of) and open it up. Once I was on the Allan and saw the maze of overpasses, on ramps and bridges ahead of me I panicked, yelled “I’ll take it” and took the first exit I could. The girl was a little miffed, “Are you sure you want it? Do you want to check it out more?” I was too embarrassed to admit I was terrified of driving in Toronto, so I just stayed firm that I would buy the car.

One pawned guitar and one back-draft later and I had purchased my first car. In the end, I got pretty lucky, I think it had about 80k when I bought it and I took it well over 250k and for about 5 years I would routinely fill it with 300 plus pounds of ice sculptures… (I delivered ice sculptures while in school) and my plucky little golf was overall pretty reliable.

I bought this car because it was a rebadged variant of the Mitsubishi Eclipse which was Brian O’Connor’s car (his was a generation newer, and what I actually wanted) in the first fast and furious. I wanted this car because it was dirt fast stock (195hp turbocharged 4-cylinder engine with 11.06 psi of peak boost from factory – impressive in this day), all-wheel drive, and looked gnarly as well. It was also featured consistently on Car and Driver magazine’s Ten Best List from 1989-1992.

I bought this car from a stranger in Scarborough off craigslist for $1,000. Therefore, black is what I got. I would’ve got blue if I could have picked. Didn’t do much research, and didn’t listen to many people who advised against this car, including all the mechanics at my work and my dad. They said this car was a pain to work on because the engine is way too big for the space so everything would have to be taken apart costing twice as much to fix. And that because the amount of power it put out with cheap components it was prone to breaking.

Fun tidbit about the car.. the bulge on the left side of the hood is actually to make room for the timing pulleys on the 4G63 engine otherwise they would hit the hood. On the lower trim levels the cam pulleys are on the other side so the bump is just for show.

I only had the car for 3 glorious months, but I don’t regret it at all. I made some great memories in this car.

Being asked which car I would be interested in buying all of a sudden (as the only member of the team that has never bought a car), my first thought was if I needed all-wheel drive. We live in Canada and ¼ of the year is filled with Snow. I want to feel safe all year round, and after driving a Crosstrek (family car) for two years, picking an SUV would be ideal. However, after doing some research… I realized, I ain’t got no money for that. So scratch that, and let’s forget about getting a vehicle with all-wheel drive.

As a first time buyer, I would be basing my vehicle choice on 4 main things. Price, appearance, technology, and color. In terms of price, I think I want something between 20k – 30k, which would give me many options. I’d also like the car to look good. I don’t really like the look of the really boxy cars or cars that look like bugs. While there are also about a million features I could put on a new car, all I really need is a rearview camera and USB/Bluetooth. It would be nice to have navigation, but it’s not really necessary. Oh, and make it blue.

Based on the vehicles that I have researched so far, my top choice would be the 2018 Honda Civic Sedan LX. It’s affordable, stylish, and also it felt pretty great when I gave it a test drive. It comes in this amazing Aegean Blue Metallic color and also has the multi-angle rearview camera with dynamic guidelines. This will definitely be the vehicle I go for when I’m ready to purchase a vehicle.

My first and only car is my dear Penelope.

I spent over 3-4 months researching as I started off looking into pre-owned vehicles. Since this was my first vehicle purchase, it was very confusing to determine at first what would be the best option for me. I think that’s what a lot of buyers forget (IMO). I think most people need to determine what they want themselves before they listen to the opinions of others. Anyways, I spent one whole month thinking I wanted a pre-owned vehicle but considering how fast inventory moves, it was hard to make such a decision (regardless if I loved the vehicle or not).

After researching, I realized it was best I purchased a new vehicle and spent some more time researching options. In my top 3, I was considering the Hyundai Elantra GT, Subaru Impreza and VW Golf. While the Elantra GT may have been the more budget-friendly option, the drive was very underwhelming. Not sure if this the correct terminology, but I didn’t like the turning radius of the Elantra GT, it seemed like I had to really turn to even feel the vehicle turn. As for the Impreza, it was definitely a nice ride but unfortunately the monthly payments and insurance was a bit over my budget. Also, the guy who tried to sell me the Impreza did a poor job doing so. He literally gave me the key to test drive myself, didn’t walk me through the features or anything. Factoring in monthly payments, maintenance, gas, insurance, the VW Golf made the most sense and only vehicle that wouldn’t hurt my wallet.

After a close friend of mine bought a new Mazda, I got a major case of jealousy from the process. I was with her as she went from dealership to dealership and test drove cars. It was so much fun and I wanted to experience that for myself. So I took my trusty sidekick out (my mother) and started looking. I decided pretty early on that I wanted a new car as I wanted something that I knew would last. I also would have had no way of knowing what shenanigans took place in a used car, so I didn’t want to go down that route.

I originally started looking at Toyotas, specifically the Camry. However, to get the features I wanted in a car, the Camry was a bit out of my budget. So I started looking elsewhere for what I wanted. I mean, if I’m getting a new car, I might as well get everything I want. Then I saw an ad in the paper for my local KIA dealership for a new Forte. They were having a special where I received $500 off for my first ever car and an additional $500 off for being a recent college graduate. So my sidekick and I went to test drive the Forte EX and I fell in love with it.

Since I was able to get what I wanted, I went all out with negotiations. I got a pretty blue colour, a bunch of free stuff and I was happy! I could’ve gotten a sunroof on my car, but I would’ve had to wait 4 weeks to get it, and I didn’t have the patience for that. At the end of the day, I had it for 4 years and drove all over this country in it. I loved every second in it.